A quick Google search will tell you that Palermo is the capital of Sicily, which is an autonomous region in southern Italy. It is also about 2,700 years old, and an important historical city to Italian history, lying on the coast of the island of Sicily on the Tyrrhenian Sea.

What Google can’t bring to life is experiencing the city on foot, for yourself. Though I spent only a short couple days in Palermo, I was astounded by the beauty of the old monuments that lie on the Quatro Canti, the Four Corners, quadrants. There are two large streets that are promenades during the day for pedestrians and bicyclists, which bisect each other like a giant +, thus the name, Four Corners. This outlines the Old Town, which is where the old monuments, the churches and theaters, some of which are UNESCO World Heritage sites, lie. 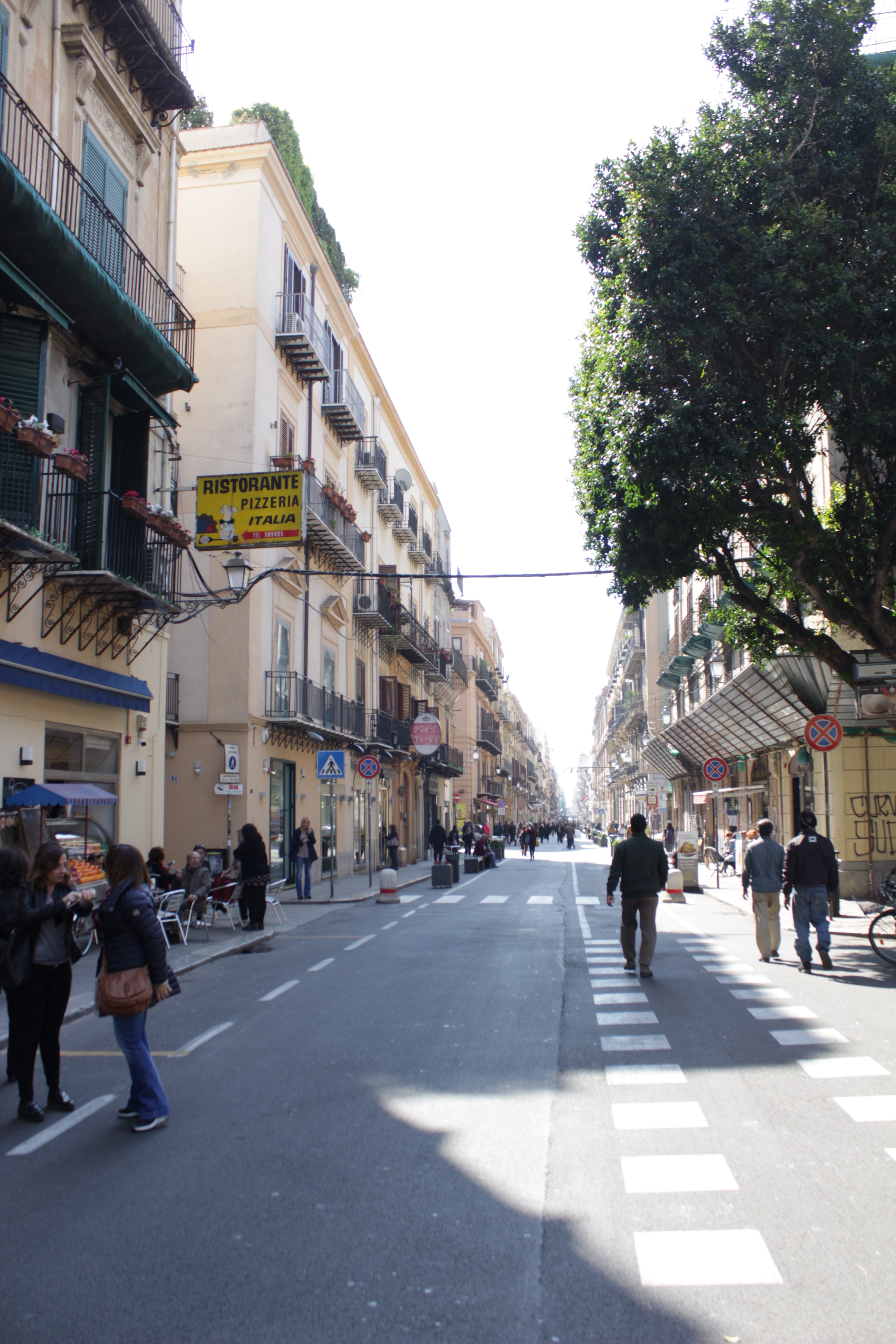 This is what the promenade looks like during the morning. You can faintly see Mount Pellegrino at the end of the horizon guarding over Palermo.

I was lucky enough to find an Airbnb right in the heart of the Old Town, located in a small street right behind the Teatro Massimo, run by an Italian husband and wife, Nino and Maria. I was met by Maria and her small dog at Teatro Massimo at night, who walked me back to the apartment and made me feel very welcome. Maria showed me her house, which was a three (or four!) story building which she had turned into an Airbnb and decorated with colorful paintings and colorful accessories as if it came straight out a small town in South America (or maybe that is just how people decorate their residences in southern Italy, I do not know). 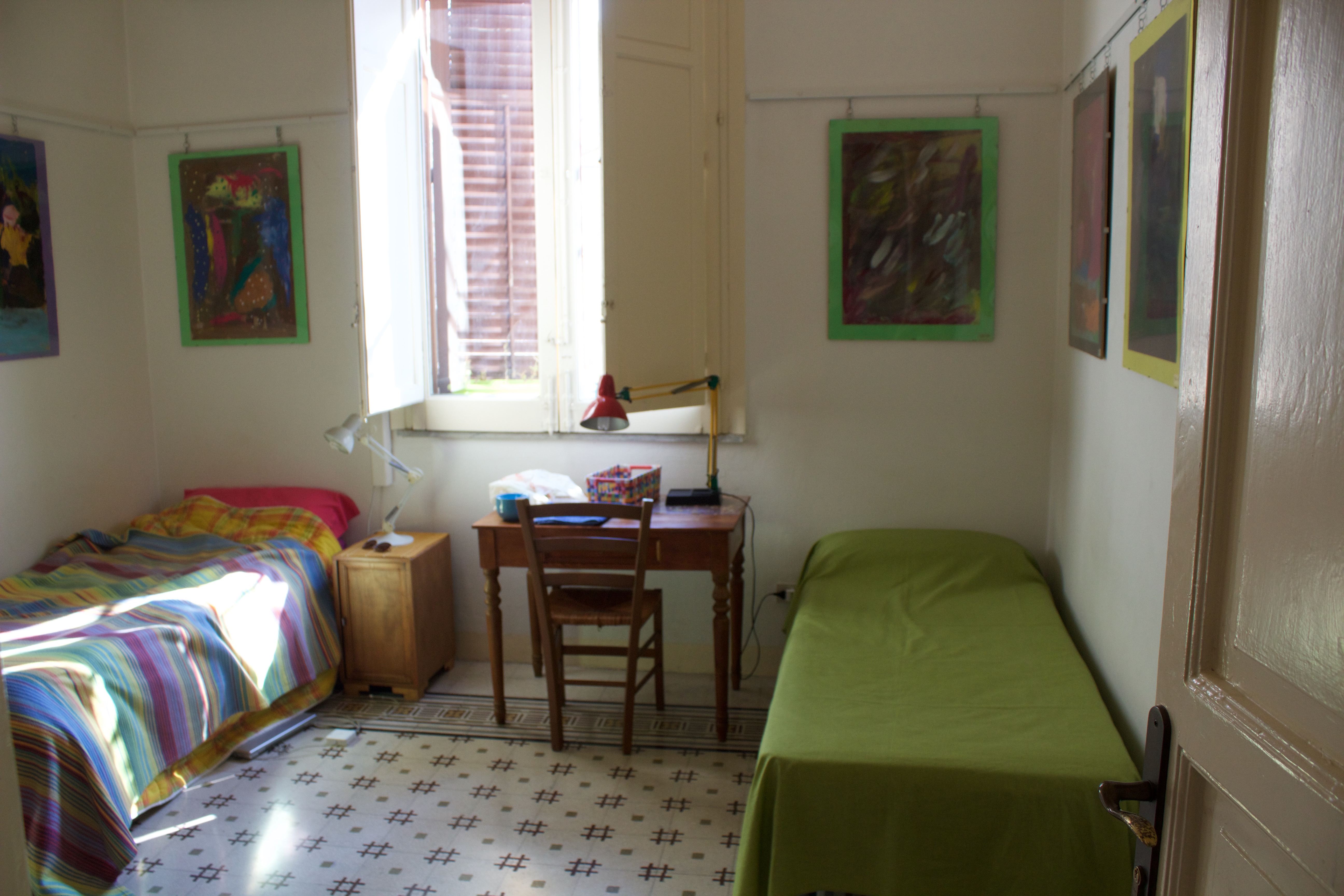 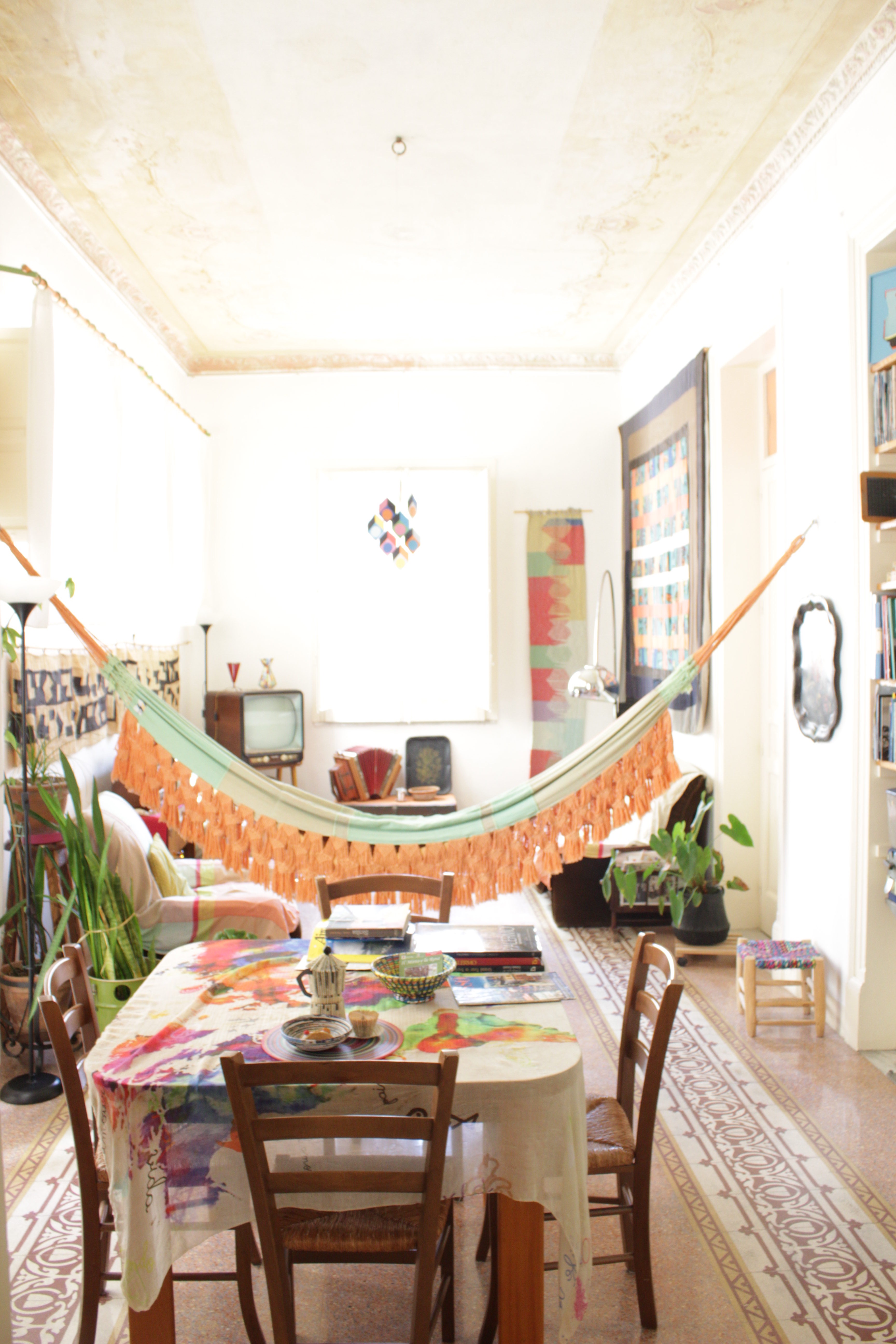 I was so used to getting crammed mercilessly into spaces full of other people, like the tiny airplanes, the crowded buses, the crowded metro cars, crowded street trams, crowded tourist areas, and crowded hostel dorm rooms, that having a whole room to myself was like getting a present for my birthday. I was so overjoyed I think I cried later that evening (at least, I think that was the reason, and not the chemical-induced cry I sometimes get from eating too many sugars…more on that later).

There was even a lilac bathrobe for me waiting in my dresser, a colorful towel (there was nothing NOT colorful in this Airbnb), and another colorful blanket should I get cold in the night. There was a full kitchen, equipped with utensils, pots, pans, and more colorful cups and decorations. What made me so happy was the Italian style breakfast Maria showed me tucked away inside a closed cupboard — inside there were little sweet cakes, buns, raisin bread, regular bread, cereals, jams, Nutella packets, toasted breads, a tea selection, a coffee selection, and more sweets. There were oranges in the kitchen, lemons, salt, spices, a toaster, a gas range, and inside the refrigerator, little cupcakes for her guests.

Maria is a real hospitalitist! She explained to me with pride how she had had the place for 14 years with her husband and was now the owner, as she took me up to the rooftop terrace and showed me, also with great pride, how close we were to the UNESCO monuments adorning the Quartro Canti. With a wave of her hand, she swept it over the mountain range that sheltered and guarded Palermo since its first settlement and said, ‘here we are, alora, we are here, how you can see, the Quatro Canti, here and here, and the churches, the San Cataldo’s church and the church of Saint Catherine, UNESCO World Heritage sites, monuments for all humanity.’

When she said that, ‘for all humanity,’ I realized suddenly (yet another of those life-changing epiphany moments) just how close I was to the beginnings of civilization, standing a few hundred meters or so from churches that had been built hundreds of years ago in much different times. And they were still standing, in all their glory, in the midst of machinery and modernity, for all of humanity. The humanity of it made me want to cry, not out of sorrow, but because I was really there, on that rooftop with this amazing lady, who was telling me about UNECO sites that existed for all of humanity. The whole world.

She had founded a center for underprivileged children with her husband over 30 years ago, she said, when I asked her about the paintings. There are about 50 or so paintings, all of the same size, hanging on S-hooks from wires all around the apartment, a gallery of art. They were made by the children of my center, she said, adding that of course they were no longer children, but adults with children.

If you need me, Maria said, before turning to her own room, I am here. She was looking at me in a very kind way, as if she had X-rayed me the way a discerning mother can do to a child, when I told her I was traveling alone.

‘Please, Stephie,’ she said, before turning in, something about her posture reminding me very much of a nun, ‘eat something.’

It was her tone that struck me the most, a gentle admonishing and also a tender, almost motherly phrase to a wayward child, and also a welcoming entreaty into her home. In some cultures, people do not eat in the house of their enemies, and accepting food from someone is often considered an ultimate act of kindness and hospitality. I was struck because I have often been told to eat more, due to my tall, thin appearance, but from Maria, it almost seemed like she was telling one of her wayward children in her centre to take a pastry for the road. Maybe it was the missing patch of my left eyebrow that moved her, or the overall disgruntled appearance and airport smell of Traveller that was me, who knows. It was an interesting moment, one I shall not likely ever forget.

I gave a slight bow to her and said good night, and then did go to the Italian all-you-can-eat breakfast and helped myself to what was in store.

The next day, I wandered around Palermo, going down the promenade to the Quatro Canti, and looking about the Piazza Pretoria. 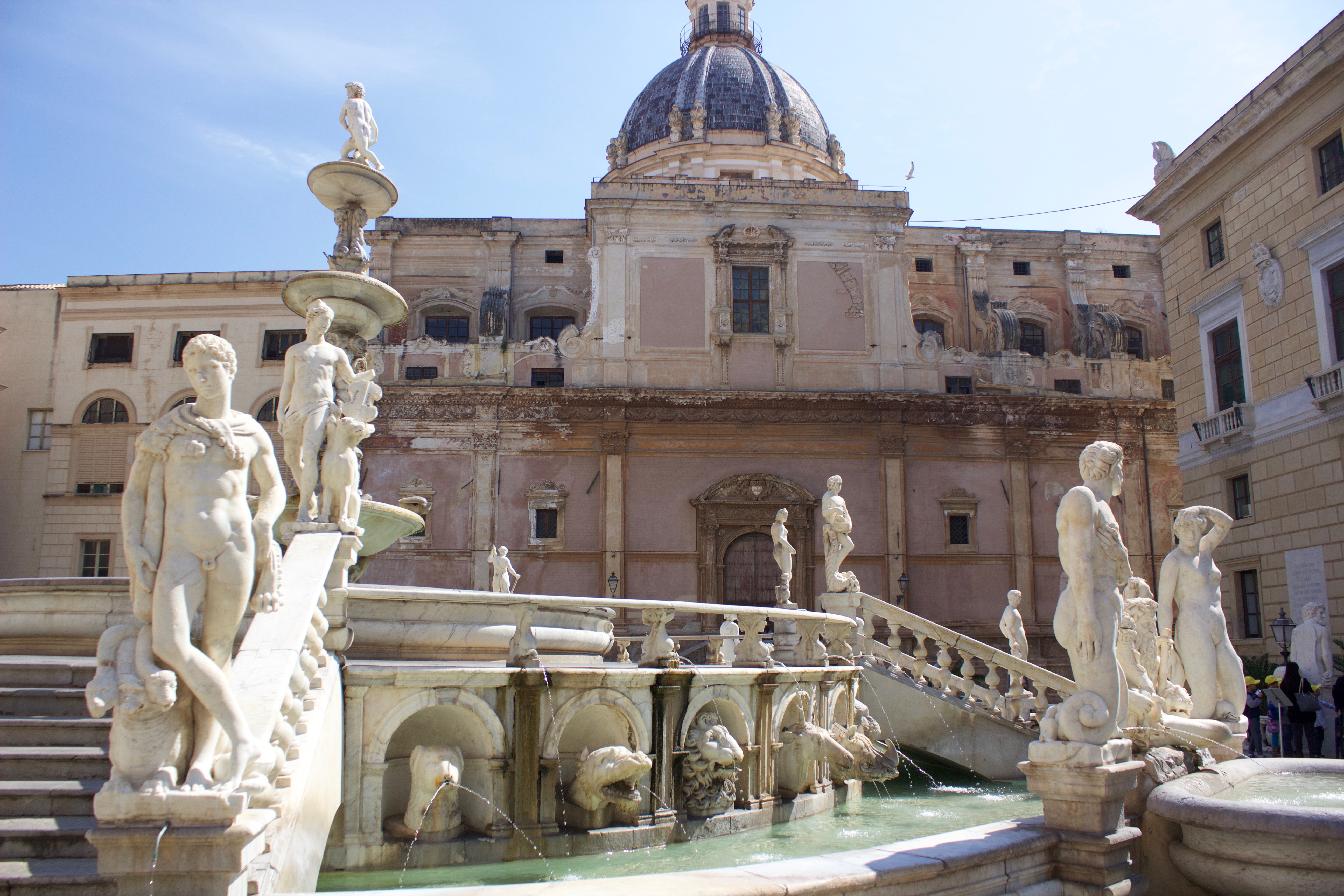 I admired the San Cataldo’s Church from the outside, although I did not go inside (I looked through the picturesque coffee table book on it back at the apartment, however), contented just to see it. I know, I know, you might shout, ‘but you were THERE, right there, why didn’t you go inside and look at the history?’ And to that I must answer, because I was happy enough to simply be standing side by side these beautiful monuments. I didn’t need to go inside to appreciate their beauty. 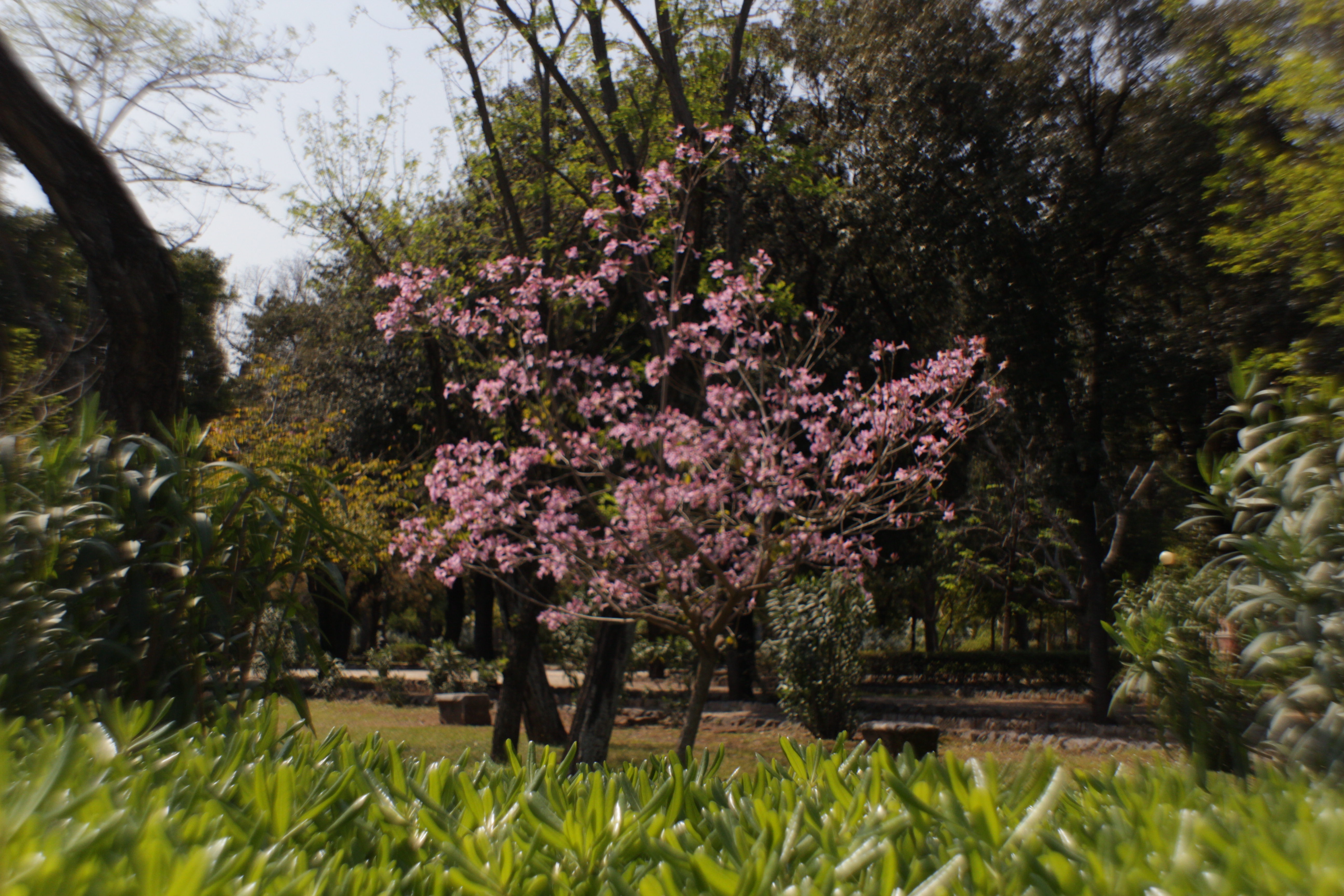 Instead, I felt very bothered by the constant hustle and bustle of the streets, so I headed down to find the plants, in the botanical garden. Here, I found a bench and listened to the twittering birds for a while, appreciating the sub-Mediterrean climate, the flowering trees, and the greenery. I like nature. I know many people who don’t like it as much as I, but to me, it’s my natural element. People exist in nature even if they are inside four walls. I like being of it, in it, and around it. It makes me feel calm and alive, like I am Eve in the Garden of Eden, or as my best friend Raphael would say, a wood rose.

So, there I was, sitting in this beautiful botanical garden, decompressing from the traveling I had been doing the past three weeks, and trying to wrap my head around the fact I was in Sicily, southern Italy, in Palermo, with UNESCO sites right outside my Airbnb. So far on my Europe trip, I have been to Warsaw, Munich, Prague, Munich, Nuremberg, Malta, Nuremberg, Milano, Venice, and now Palermo. It is a lot of traveling, and I really didn’t stop to think about how it was until now. 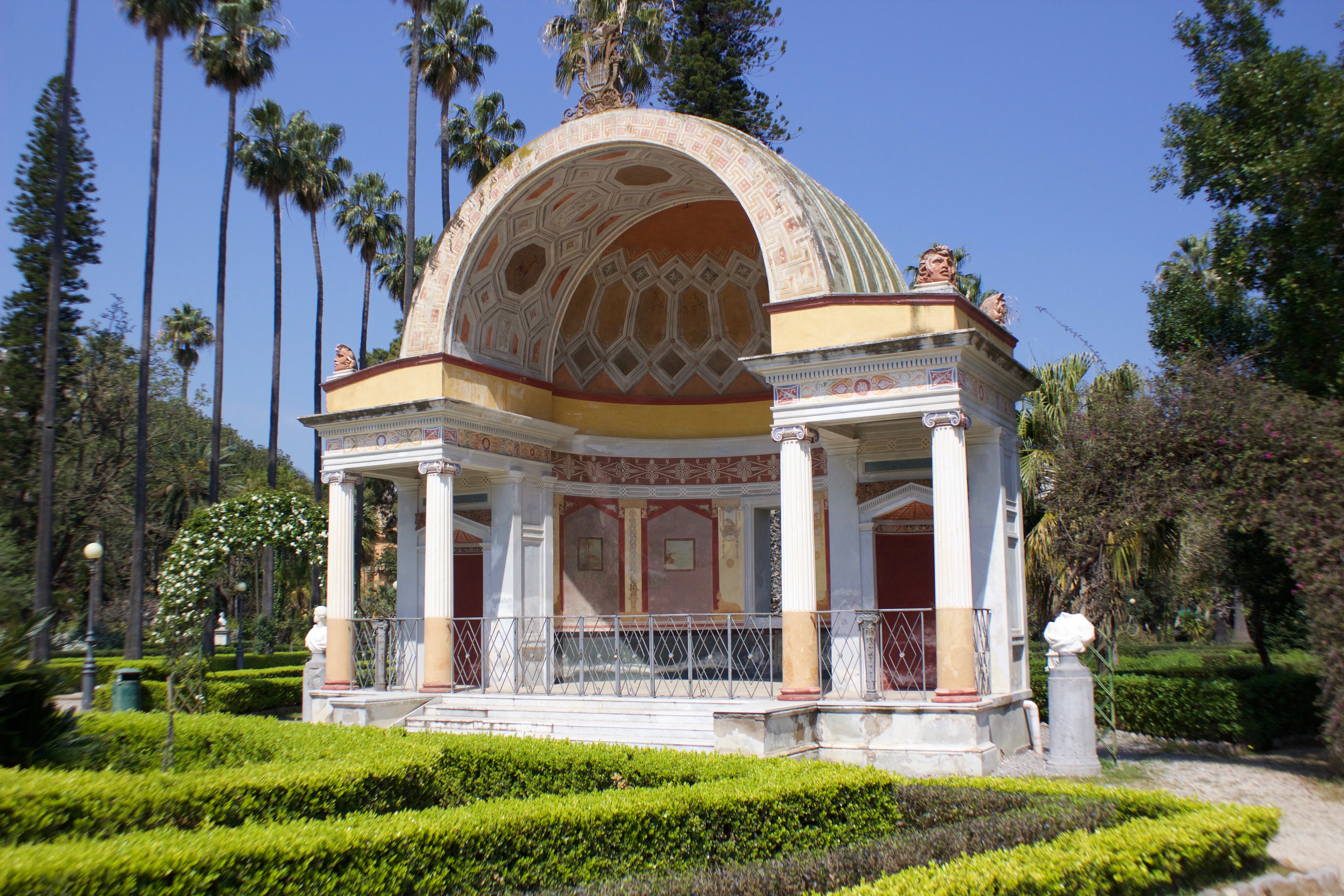 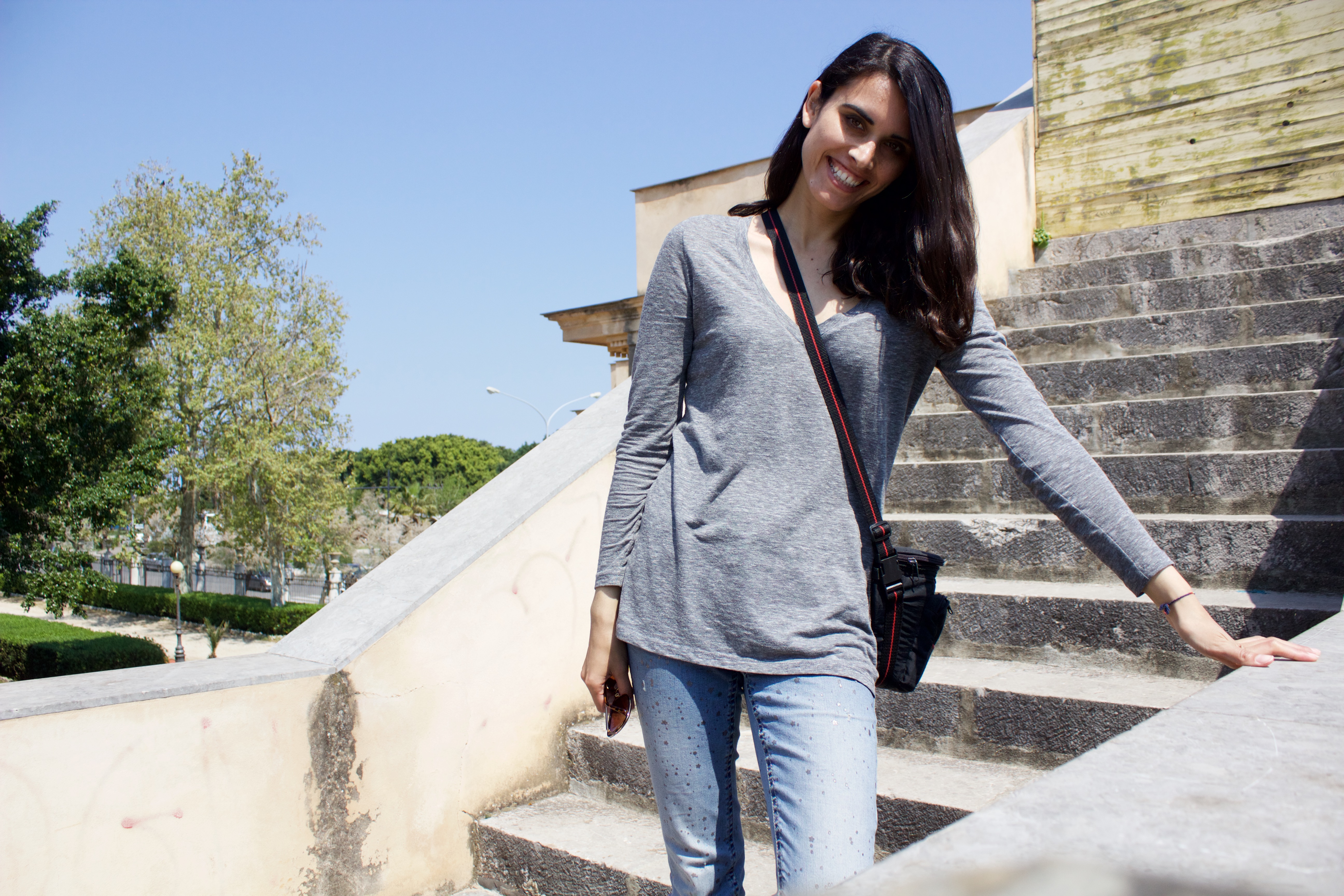 To be honest, traveling made me very happy. I felt very free, away from worry, stress, anxiety, and any negative emotions. There was no one to yell at me, to tell me I was too fat or too thin, no one to apologize being late to, no one to tell me to act a certain way — I was finally free. The freest I had ever felt in my life, because I had planned the whole thing myself, and worked for it myself, and now I was enjoying how well I had planned it and budgeted the whole thing. Felt pretty good!

Lots of people, even those who love us, can say hurtful things and try to bring you down because they are feeling bad themselves or want you to be a certain way to save you from potential disaster. While it is nice to know we are loved and cared for, what I have valued the most about being in Europe is how kind the people have been to me when they have nothing to gain from my being there (besides my US Dollars, of course). No man has ever shouted at me yet, or approached me menacingly, or even molested me. Coming from ‘America’s number one college party town,’ where it is sad but true that hook up culture and alcohol and drugs are rampant, and strange attitudes about dating and sex exist where many young men treat teenage women like cheap prostitutes for the price of a few drinks, or make them think dating might lead to something but dump them after having had enough sex, I was so refreshed to not have to deal with any of that. For a few weeks, I was simply free.

Of course, I am a tourist for the time being, a traveler and mere observer. I cannot tell you intimately what life is like as a beautiful young woman growing up in Palermo or Nuremberg or Malta or anywhere else I have been. I can only relate my thin slice of observation, which is mostly: people are nice in Europe because space is so limited and history, so rich, with so many different ancient cultures allowed to blend together. It is not perfect, there is still poverty, there is still the struggle to live, and there is still heartbreak and loss mixed with love and happiness. However, I do have to tell you that as someone from two cultures growing up in America, I was very impressed with how nice Europeans are to each other, getting along, sharing space, and preserving their monuments for humanity. Although it may change (everything always changes), I hope others can experience Europe in the same way of appreciation I have. They may not be the richest country in the world financially, but I have to admit, the European way of life, on the surface, seems much more cultured and classy than the coarseness of American youth culture I have experienced to date.

A few more pictures for you from Palermo and that wraps it up. As always, all opinions are my own.

One thought on “Palermo – capital of Sicily, Italy”